About the concept of relational withdrawal

The concept of early relational withdrawal in infants

The first clinical description of the behavior of sustained relational withdrawal in young children outside of autism belongs to Engel and Reischman, in 1956, with the famous case of Monica, aged 18 months. Affected by an esophageal fistula and fed by tube while waiting for the restoration of the digestive continuity, Monica suffers from very disturbed relations with her mother. Her mother is very embarrassed by the tube, and she is also very depressed, isolated and mistreated by her husband. Monica is hospitalized in a severe state of withdrawal and anorexia with a severe staturo-ponderal and developmental delay.

The first clinical description of sustained withdrawal behavior in youth

However, she developed an increasingly clear attachment to her doctor and her subsequent evolution, favored by that of her mother and their relationship, was rather positive and was followed by Engel for 25 years. Engel and Schmale propose that the energy conservation/depression withdrawal reaction is a basic defensive process to conserve energy in critical situations. Fraiberg had described an analogous defense mechanism, freezing, observed from the age of three months in children subjected to very pathological relational situations. Menahem describes two cases of intense withdrawal in children with severe growth retardation. 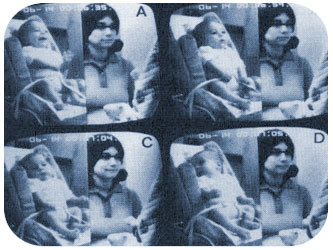 Relational withdrawal is a major component of the two- to three-month-old infant’s response to the altered relationship that occurs during the still face experiment or in the clinic during maternal depression. Withdrawal behavior is also one of the most stable developmental behaviors, despite the major changes that occur in the first three years of life.

The baby’s defensive repertoire is in fact initially quite limited, and is mainly centred around protest and withdrawal. Withdrawal is more difficult to spot than protest, and yet it intervenes in numerous situations of early psychopathology, in an obvious or accessory way, whether it is a disorder caused initially by a relational disorder, or by an organic disorder, as in intense and lasting pain. The child’s prolonged withdrawal reaction is an essential element in the clinic of most of the major diagnostic groups in early childhood: depression, pervasive developmental disorders, attachment disorders, anxiety disorders, post-traumatic syndrome, sensory disorders…

The withdrawal reaction is therefore an essential alarm element to which the pediatrician or childcare provider must pay particular attention during the routine examination of the baby.

On the right and in green the situations where withdrawal is a constant element of the clinical picture, on the left and in blue those where it appears without being constant.The withdrawal response is therefore an essential warning element to which the paediatrician or pediatric nurse must pay particular attention during the baby’s routine examination.
Thus, withdrawal behaviour appears as an important part of the young child’s behavioural repertoire, and as an alarm signal that it is critical to perceive early, and not normalize.<br>We did not find in the literature an instrument for measuring relational withdrawal in young children before the age of 2, and we therefore built one: the Alarm Distress Baby Scale.

The construction of the scale

Antoine Guedeney, a young pediatrician, did his military service in Chad as a National Service Volunteer. It was during this experience that he observed many babies suffering from Kwashiorkor type malnutrition, which gives a psychologically impressive picture of intense withdrawal ( Guedeney, Lan et, 1995).

Antoine Guedeney works at the Institut de Puériculture de Paris, he took over from Michel Soulé as director of the Guidance service of the IPP. He then contacted the PMI (protection maternelle et infantile) to develop a collaboration. Collaboration between the services was then rare. The project is launched to develop a scale to evaluate the relational withdrawal of the baby in order to have a tool of collaboration and communication between the various professionals and the various services of care to answer the following questions:

Mrs. Martine Vermillard-Gateau – nursery nurse, Mrs. Edith Thoueille – director and the PMI doctor, Mrs. Benjellal-Zamoun educator, – Mrs. Dr. Charon played an essential role in the elaboration and the first validation of the ADBB, which was recognized in the awarding of a research prize of the SFPEADA in 1989 “to Dr. Antoine Guedeney and his team.

Award of the Grand Prize for Research of the Institut de France. The generous endowment of this prize has allowed the financing of the first website www.adbb.net, the financing of ADBB studies in particular in Argentina and Uruguay and continues to allow the financing of specific training and research and the equipment of the child psychiatry service, at the Ney Jenny Aubry policlinic.

The first validation study of the ADBB was published in 2001, after more than 3 years of joint development (Guedeney and Fermanian, 2001).

The evolution of the scale since…

Subsequently, there have been several international validations that have confirmed the cut-off score of 5 and above, supporting the cross-cultural validity of the scale and the universality of the construct (see Guedeney Purra & Matthey, 2013 for a review in the ADBB section of the Infant Mental Health Journal, in the Appendix).

Studies in France have shown the predictive validity of ADBB measures on the risk of mother-baby interactive disorders, especially when these measures are repeated (Rochette & Mellier, 2007).

The cross-sectional study of 650 children at the DEPSE in Paris confirmed the clinical validity, and showed an incidence of 13% in an average risk population (Guedeney, Foucault, Bougen, Larroque, Mentre A, 2008).

The Norwegian and Finnish studies found a lower incidence of 3 to 6%, but on low-risk and less vulnerable samples. (Puura, Guedeney, Mantymaa & Tamminnen, 2007; Puura, Mantymaa, Luoma, Kaukonen, Guedeney, Salmelin, Tamminen, 2010). This has established the links between withdrawal and psychosocial risk factors, particularly with postnatal depression.

Another series of studies has shown the evolutionary risk of sustained withdrawal behavior: Milne & al in Australia show the effect on language and communication development of early withdrawal at 6 months when the child is assessed at 2 years (Milne, Greenway, Guedeney, Larroque, 2009).

These findings were confirmed by the EDEN study at 2 years of age in France (Guedeney, Pingault, Thorr &Larroque, and The EDEN Mother-Child Cohort Study Group ,2014).

These studies with varying levels of parental risk help describe the normative development of the relational withdrawal response, which develops from the infant’s temperamental characteristics; they show that this response is much clearer in cases of prematurity, and even if the prematurity is moderate. Finally, recent studies with home movies allow us to discuss the interest of the ADBB in the early detection of developmental disorders, and in particular the early signs of autism (Wendland, Gautier, Wolff, Brisson, Adrien 2010).

Research projects in 2022 using the adbb

Certified trainers in the world

Publications including some in prestigious journals